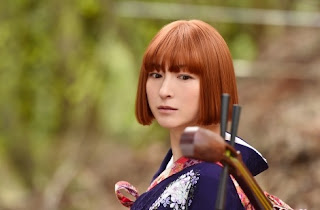 Hirosue Ryoko will be appearing from the 4th episode of TBS Summer 2016 drama "Kami no shita wo motsu otoko" due to be shown on 29 July at 10pm and plays the role of the mysterious onsen geisha Miyabi who the lead character Tomonaga Ranmaru has been searching for. To date, the name of the actress playing Miyabi has been indicated as a secret in the ending credits of the drama.

Ranmaru is able to detect the contents of anything he tastes including saliva and gastric juice thus he is unable to kiss any woman nor get into a relationship. However, when he kissed Miyabi on the night of his grandfather's wake, he was surprised to find that his ability to taste was rendered powerless and all he could remember was the feeling of happiness. As such, he wants to find Miyabi again to find the reason thus embarks on the journey to various onsen resorts to look for her.

Hirosue commented that she is honoured to be able to play a mysterious woman in this drama full of Tsutsumi Yukihiko's ideas and called upon viewers to continue watching in order to find out what will happen. It was also revealed that it was Tsutsumi's idea to keep her identity a secret during the first few episodes so as to keep the viewers in suspense.