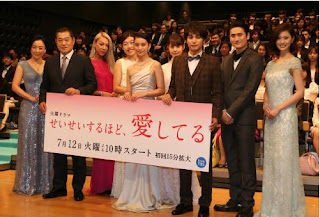 The completion screening event of TBS Summer 2016 drama "Seiseisuru hodo, Aishiteru" was held on 3 July which was attended by cast members Takei Emi, Takizawa Hideaki, Nakamura Aoi, Matsudaira Ken, GENKING, Kanno Misuzu, Yokosawa Natsuko, Nakamura Hayato and Wada Akari. The drama which will begin its run from 12 July in the Tuesdays 10pm timeslot, features Takei as the heroine who works in the PR department of Tiffany Japan and falls in love with the already-married vice president played by Takizawa. Tiffany will be providing full support to the production of the drama including filming at its shops. During the event, Takei was wearing 7 pieces of jewellery from Tiffany which were worth a total of JPY 160m.

Takizawa commented that the complicated relationship between Takei's and his character is a selling point in this drama. However, he finds it embarrassing to have to say some really cringe-worthy and romantic lines such as "let me catch your flu bug instead" or having to look at each other in slow-motion smilingly. As for Takei, she said that she also felt shy about having to listen to such sweet words every day during the filming and has to control herself from bursting into laughter due to the embarrassment. As the relationship between the characters is subjected to interpretation by the viewers and may be seen as pure love or an extramarital affair, she is hoping that they will still enjoy watching the drama.