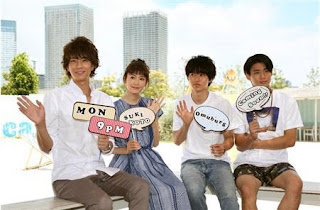 The production press conference of FujiTV Summer 2016 drama "Suki na hito ga iru koto" was held at MAGIC BEACH in Koto Ward, Tokyo on 4 July which was attended by the cast members Kiritani Mirei, Miura Shohei, Yamazaki Kento and Nomura Shuhei. The drama which begins its run from 11 July features Kiritani as a patisserie who works at a seaside restaurant in Shonan owned by the three brothers and how she regains her ability to love someone through her interaction with them. Filming began from May.

Kiritani commented that the drama will make viewers excited as they follow the heroine's journey of finding love and hopes that they will like it. When asked about what they thought was good and bad about their co-stars, Yamazaki expressed his thanks to Kiritani for going along with the strange jokes of his and Nomura's but jokingly pointed out that her face looked weird while she was asleep. Nomura also joined in by saying that Kiritani could fall asleep while having her make-up done so he finds that very intriguing. In response to this, Kiritani said that her eyes tend to open while she's asleep so people would come and talk to her. She also revealed that Yamazaki looks very different from his usual self when he has just woken up to the extent that she doesn't think that she's looking at the same person.