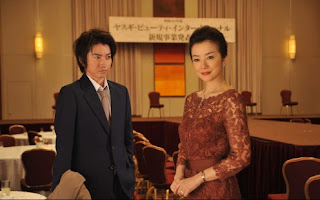 Fujiwara Tatsuya and Suzuki Kyoka will be starring in the new TV Asahi drama SP "Ningen no Shomei" (Proof of the Man) based on the same-titled mystery novel by Morimura Seiichi published in 1976. The drama SP which is due to shown in spring this year, will be set in the 70s as per the novel which is in contrast to the previous drama series in 2004 based in the modern era. Fujiwara and Suzuki last worked together in the 2004 NHK Taiga drama "Shinsengumi!".

The story is set at Tokyo in the year 1974 where famous beauty expert Yasugi Kyoko happens to take the same lift at a hotel that is holding a party with a black youth who is later found to be stabbed to death. Fujiwara will play the police inspector Munesue who investigates the case. With regard to their collaboration this time, Fujiwara referred to Suzuki as someone who he always wants to work with while she praised him for being good and charming at various genres including stage plays, dramas and movies. As for their respective roles, Fujiwara commented that he hopes to do a good job to the extent of making Matsuda Ryuhei exclaim why he didn't get the role instead (Matsuda's late father Yusaku had taken on the same role in the 1977 movie version). Suzuki revealed that her role is a desirable one to many actresses so she hopes that those who did not know of the original movie will come into contact with this story through their drama SP.

I liked the 2004 drama with Takenouchi Yutaka. Hope this one will be good as well. Not sure about Fujiwara's hairstyle though!

I was also wondering why his hairstyle seems to be relatively unchanged no matter what role he played...

Girls, it's the most stupid comments I ever read.