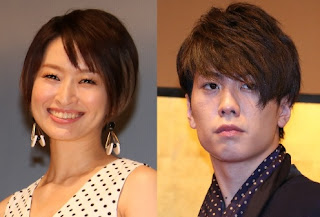 SPEED's Shimakuro Hiroko and Saotome Yuuki registered their marriage on 11 February which was also their first anniversary since they started dating. According to insiders, the couple submitted their marriage application at a government office in Okinawa which is Shimabukuro's hometown.

Shimabukuro and Saotome were first reported to be an item in September last year and announced their engagement via their respective blogs. They met while acting in the stage play "KABUKI" and started dating soon after with the intention of getting married.

Source: Sponichi
Posted by Chiaki at 1:15 AM