Hirose Arisu & Tanaka Daiki admit to being in a relationship 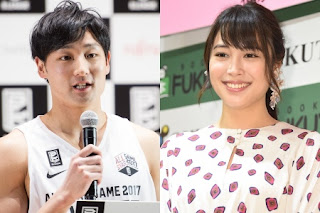 Hirose Arisu and basketball player Tanaka Daiki have admitted to being an item as reported on 8 February. The couple reportedly met in September 2016 when Hirose and her younger sister Suzu took on the role of broadcast supporters for the opening match of the pro-basketball B-league which Tanaka plays in as a member of Alvark Tokyo. They were said to have started dating in December the same year after bonding over their common interest of basketball as Hirose used to play the sport for 6 years at her hometown in Shizuoka since primary 3.

News of the couple being an item were first published in the 9th Feb issue of "Shuukan Bunshun" to which Hirose's agency commented that this is her private matter so they will leave things to her. They also revealed that Hirose herself informed her agency about this matter in December last year. At the same time, Tanaka's management company also confirmed the news.

Source: Sanspo
Posted by Chiaki at 1:02 AM