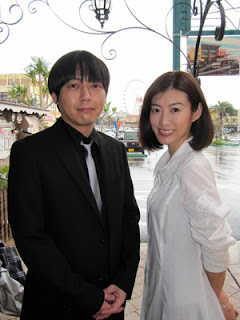 Tomosaka Rie announced through her blog on 29 March that she had divorced her second husband Suneohair at the end of last year following reports in the media about this. In her post, Tomosaka said in a self-depreciating tone that she was aware of the likelihood that people might say that they expected this to happen (since this was her second marriage) and she had nothing to say in return to that. However, she stressed that even though divorce itself can be hardly seen as amicable, the process went through smoothly with no alimony demands. Although she and her ex-husband tried to talk things through, it did not turn out well so they had to go their separate ways.

With regard to her 12-year-old son from her first marriage, Tomosaka said that she was sorry for letting her son be caught in this undesirable situation created by the adults. Her son was more mature than she expected which she also felt was due to the circumstances she had placed him in. As such, she will focus more on being a frank and honest mother to her son going forward.

Tomosaka got married to actor and stage director Kawahara Masahiko in 2003 and gave birth to their son in 2004. However, the couple got divorced in December 2008 before she remarried Suneohair in June 2011. Tomosaka and Suneohair met through the 2010 movie "Aburasakusu no Matsuri" and sang the ending theme together which led to them dating. Subsequently, they acted in the movie "Haizai ~ Kamisama no iutoori ~" in 2012 after their marriage. During the early days of their marriage, Tomosaka would mention Suneohair in her blog and Instagram but this stopped in the last two years. During the New Year holiays this year, Tomosaka posted in her blog that she had gone on a trip to Karuizawa with her parents and her son. While this is Tomosaka's second divorce, it is Suneohair's third divorce as he had been married to two non-celebrities in the past.