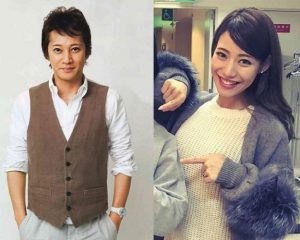 According to various media reports such as the 16th March issue of "Josei Seven", Nakai Masahiro is said to be dating former-dancer-turned choreographer Takeda Maika for the last six years. The couple was said to have met eight years ago when Takeda danced the parts of Nakai and Kimura Takuya on their behalf during SMAP's concert rehearsals and they started dating soon after. With regard to this news, Johnny's Jimusho responded to the media that they had no comments to make since this is Nakai's private matter.

Takeda who is 12 years younger than Nakai, is a very sought-after choreographer and has worked with various Japanese artistes such as AKB48, Amuro Namie, Kato Miriya, BoA and KinKi Kids and Korean groups such as SHINee. She does not use any social media sites but appears frequently on the social media accounts of various artistes especially former AKB48 member Itano Tomomi who has been engaging Takeda as her back dancer since she made her solo debut. Takeda was featured in a 2013 NHK documentary when she was coaching AKB48 members.