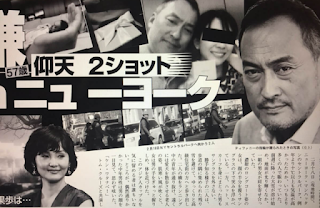 According to the latest issue of "Shuukan Bunshun", Watanabe Ken is said to be having an affair with a jewellery designer who is 21 years younger than him. In the article, the woman who is described to look like freelance announcer Tanaka Minami, met Watanabe in August 2013 when she was working as a hostess at a club in Osaka which led to them dating one year later and the woman quitting her job. It was also reported that she had accompanied Watanabe on his charity trips to Kesenuma in Miyagi Prefecture, Osaka and New York on various occasions. Recently, Watanabe's wife Minami Kaho went to visit him in New York before proceeding to visit her son from her previous marriage to Tsuji Hitonari who is based in San Francisco. Soon after she left, Watanabe and the woman met up for dates. The article also provided various photos of Watanabe and the woman behaving intimately.

Watanabe got married to his first wife in 1983 and had two children Dai and An who are both actors now. They got divorced in March 2005 before Watanabe married Minami in December of the same year.

When asked about the alleged affair, Watanabe's agency said that he is overseas at the moment and that they will check with him on this once he returns. As for Minami's agency, they said that she is on long leave until May so they have no idea where she is now.

In response to the affair rumours, Watanabe's photo has been taken off the CM on the homepage of Daiwa Securities. He had been featured in their CM since 2015 and his TV CMs were scheduled to run until 31 March. As the company is trying to ascertain the facts behind this allegation, they decided to remove his image from their website and will review his CM deal in the meantime.