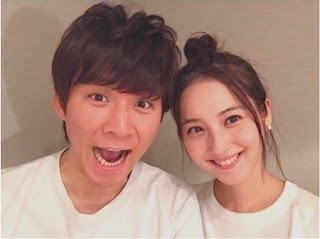 Un-jash's Watabe Ken and Sasaki Nozomi have gotten married as per Watabe's announcement during his appearance on the live broadcast of NTV's variety programme "Gyoretsu no dekiru houritsu soudanjo" 3-hr SP on 9 April. During the second half of the programme, Watabe revealed the news about his marriage and was congratulated by the artistes who appeared in the same programme.

During his appearance on the programme, Watabe was asked about how they got together and revealed that they got to know each other through common friends and hung out together as a group at first. Gradually, they started going out together slightly before rumours of them dating came out in the media. He was the one who declared his feelings to her first and they call each other by nicknames "Wakkun" and "Non-chan".

Following this, there was a call made to Sasaki live during the programme where she was asked about what she likes about her husband. Sasaki commented that Watabe is a gentle person and she feels at ease with him. As Watabe is known to be a gourmet, Sasaki was asked about the type of food she makes for him. She said humbly that she only does simple fare which made Watabe comment that she is very good at cooking and makes more than simple dishes for him. When asked if they squabble, the couple said that they can't remember when was the last time it happened. As for how Watabe proposed, Sasaki said that he was very direct. Watabe said that he promised to live long (as he was 15 years older than Sasaki) and asked her to marry him. However, he hasn't had the time to tell his Un-jash partner Kojima Kazuya yet about his marriage while Sasaki said that they have always been quite open about dating in public.

Watabe and Sasaki were first romantically linked in April 2015 and later reported to be cohabiting according to a female's magazine in January this year. When Watabe appeared on the TBS variety programme "All-Stars Kanshasai" a day earlier, he was asked about the marriage rumour by the host Imada Koji and said that the latter was being too direct but didn't deny it.

After the programme, Sasaki followed up with her announcement on her Instagram account where she posted a picture of herself with her husband. The couple also released a joint statement through their agencies on the same night where they pledged to work together to form a happy family.