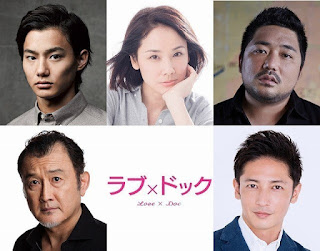 Yoshida Yo will be taking on her first leading role in a movie when she appears in the film "Love x Doc" written and directed by Suzuki Osamu who is making his directorial debut. Co-stars in this movie based on an original love story include Nomura Shuhei, Shinohara Atsushi, Yoshida Kotaro and Tamaki Hiroshi. Filming begins in April and the movie will be released in cinemas next year.

Yoshida plays Goda Asuka, a 40-year-old pastry chef who owns a dessert shop and has two employees Hanada Seiya (Nomura) who is younger than her and Gonda Kenichi (Shinohara) who used to be a salaryman and aspires to become a pastry chef now. One day, Seiya suddenly confesses his feelings for Asuka which makes her extremely troubled because she is already involved in an extramarital affair with Awai Junji (Yoshida) who was her boss before she opened her own shop and has an ambiguous relationship with Nomura Shunsuke (Tamaki), a trainer working at a gym who her friend likes. In a bid to sort out her love life which has been in a mess since she was 35, Asuka goes for a genetic check-up at a mysterious clinic named "Love Doc".

Yoshida commented that she is very excited and eagerly looking forward to acting in this movie along with actors with their own types of charisma. She pledged to do her best in showing the clumsy side of Asuka in her love life and the feelings which her character experiences through the three different types of relationships.

Ah, new movie for Tamaki. Not keen on the rest of the cast, and the story sounds run of the mill. But I guess it's better than nothing.

So we might get to see tamaki show some muscle❤✌