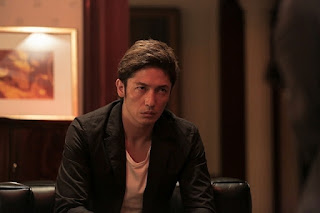 Tamaki Hiroshi will be starring in the real-life movie adaptation of novel "Aku to kamen no ruuru" (The rules of evil and the mask / English title: Evil and the Mask) by Akutagawa Award-winning writer Nakamura Fuminori which was listed as one of the top 10 mystery novels of 2013 by Wall Street Journal. The movie will be directed by Nakamura Teppei and is scheduled to be shown in cinemas next year.

Tamaki plays the lead character Kuki Fumihiro who was born into a rich family. The story begins at the time when Fumihiro was only 10 years old and came to know about the secret behind his birth and upbringing. His birth father who was the head of the household told him how he had raised his son with the aim of turning the latter into a personification of evil and "promised" to show him hell on his 14th birthday. However, one year before that, he was made to see hell first hand when Kaori, his father's adopted daughter and whom he liked, was raped in front of him. In order to protect his beloved, Fumihiro killed his father which meant that he was one step closer to the evil which his father wanted him to become. He then disappeared from Kaori's side and took on a new identity as Shintani Koichi who protects Kaori from the shadows over more than ten years. While doing so, he comes into contact again with the evil in the Kuki family...

Tamaki commented that his character is a very delicate person and it is difficult to play him. Although Fumihiro went through plastic surgery to change his looks, it can't change his interior which consists of his rational side to fight against evil and his weakness deep within. He hopes that this movie will help viewers relook at their ideas of what kindness, evilness, true love, family and friends mean to them.

Email ThisBlogThis!Share to TwitterShare to FacebookShare to Pinterest
Labels: Aku to kamen no ruuru, Movie News

Sounds like an interesting, layered role. Hope he does well in this!