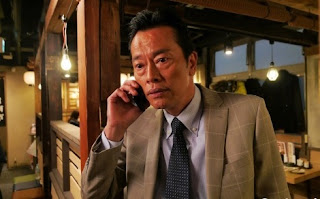 Endo Kenichi will be starring in one of the segments within FujiTV's new "Yo ni mo Kimyou na Monogatari Spring 2017 SP" which will be shown at 9pm on 29 April. His segment titled "Tsuma no Kioku" (My wife's memories) is based on a mystery thriller web manga "Kiki Kaikai" currently serialised on the website XOY and is a somewhat strange love story.

Endo plays the role of Narita Yoichiro who is a salaryman obsessed with his work and would only return home near dawn due to entertainment and drinking sessions. One day, his wife Haruko (Harade Mieko) suddenly passes away due to a fire. Surprisingly, Haruko appears in front of Yoichiro at breakfast time on the following morning after her funeral and he turns out to be the only one who can see her while his daughter can't. While pondering over whether the Haruko he is seeing is a ghost or his hallucination, Yoichiro finds out that Haruko had dementia when she was still alive and her presence is the result of her strong desire of not wanting to be forgotten. As such, Yoichiro tries to live together with Haruko afresh based on the memories she had.

Endo commented that although the image of this series' stories tend to be of the shocking and scary type, there are some sad and strange stories as well. Although he was apprehensive as to whether he could show these elements in a 20-min segment, he found it a meaningful challenge to be able to attempt this story. Despite having difficulties with the CG filming, he had no problems working with Harada since they had played a married couple before.