Matsukata Hiroki passes away due to cerebral lymphoma 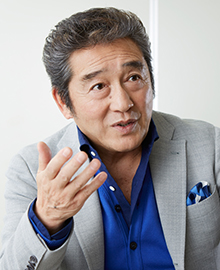 Matsukata Hiroki succumbed to cerebral lymphoma on 21 January at the age of 74 while hospitalised in a Tokyo hospital. The first sign of his health troubles first surfaced on 23 February last year when various media agencies reported that he was said to be suffering from a cerebral tumour. Due to the need for long term recuperation, he quit from the Yume Concert which was supposed to run from 1 March to 8 June last year and his play "Tooyama no Kin-san to Onna Nezumi" was also cancelled. It was only till later when it was known that he was actually suffering from cerebral lymphoma and had been heading in and out of the hospital all this while due to the administration of cancer medicine which caused cerebral infarction from time to time.

Matsukata was the eldest son of period drama star Konoe Juushirou and actress Mizukawa Yaeko and has a younger brother Meguro Yuki who is also an actor. Although Matsukata wanted to become a singer initially, he entered Toei in 1960 when he was in the last year of high school and secured his first leading role in his debut movie "Juunanasai no Gyakushuu Bouryoku wo buttsubuse" the same year. Since then, he has appeared in many dramas, movies and variety programmes. Matsukata was previously married to actress Nishina Akiko and the couple's son and daughter Masaki and Hitomi are also active in showbiz. He also has another son Meguro Daiju from a previous marriage who is an actor.

In accordance to Matsukata's wishes, his agency announced to the media that his funeral will only involve his family members and close associates. In addition, offerings and condolence money will not be accepted. As for the farewell ceremony, details will be released at a later date after discussions with all parties involved.