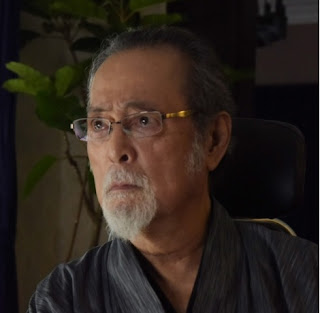 Nakadai Tatsuya will be playing a big-name politician Tachibana Yohei in the upcoming TV Tokyo drama SP "Kyoaku wa nemurasenai Tokusou Kenji no gyakushuu" opposite the lead Tamaki Hiroshi who plays a public prosecutor Tominaga Shinichi. The drama SP which will be shown on 5 October at 9pm as a special project to mark the TV station's move to Roppongi 3-chome this year, marks the first collaboration between Tamaki and Nakadai who is more than double of Tamaki's age.

Nakadai commented that he was happy to be able to join this production and said that having been an actor for 60 years, he always felt that he can't compete with the youngsters in terms of freshness so he felt very nervous standing beside Tamaki. It was also revealed that Nakadai had taken on this role because of TV Tokyo's drama producer Tabuchi Toshihiko who had worked with him on a documentary "Neshia no Tabibito" in 1999. At that time, they visited 10 countries over the course of a year which was tough and enjoyable. Nakadai had said to Tabuchi at that time that it would be nice to work together again. Although it took 17 years since then, it was great to be able to get Nakadai to participate in this production.

Awesome news. I'm always happy to see Tamaki team up with and learn from veteran actors, and it's great to see Nakadai joining this production. I remember his powerful performance from Ran. Looking forward to this SP!