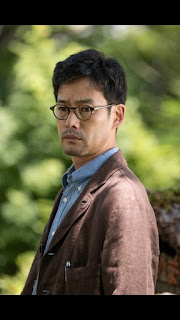 Takenouchi Yutaka will be starring in the new NHK drama "Kono koe wo kimi ni" (This voice is for you) written by Oomori Mika which consists of 8 episodes and will begin its run from 8 September in the Fridays 10pm timeslot. This is Takenouchi's first leading role in a NHK drama. Co-stars include Asou Kumiko, Mimura, Shibata Kyouhei, Horiuchi Keiko, Matsuoka Mitsuru, Ohara Sakurako, Shuri, Totsuka Shota, Nagase Tasuku, Hiraizumi Sei, Nishina Akiko, Katagiri Hairi and Sugimoto Tetta.

The story features Takenouchi as the lead character Honami Takashi who is a 46-year-old professor teaching mathematics at an university but lacks speaking skills thus is not very popular with his students. His wife Nao (Mimura) is fed up with him and leaves home with their child. At this juncture, he is told by the faculty dean to attend a speaking class where he gets into an argument with the lecturer Ezaki Kyoko (Asou) as he thinks that she is haughty and not capable of teaching him anything while she thinks of him as a boring guy. Although Kyoko's superior Sakura (Shibata) intervenes to stop the argument, Takashi still leaves the class. A few days later, Takashi happens to bump into Kyoko unexpectedly at a recitation session.

Oomori commented that she had always wanted to write a story about reading aloud sessions since her mother had been a volunteer at such events and she had always loved to hear stories there. In this time and age where communication is mostly done through methods that do not allow the voice to be used to convey one's intentions and feelings, she felt that it was good to focus on this topic since reading aloud requires the speaker to use his or her voice and heart to send a message to those listening.

Takenouchi commented that everyone would have thought of wanting to restart their lives at one point so when he read the script, he felt that although it is impossible to restart, it is actually possible to change our lives no matter what age you may be at. To do that though, there is a need to take that first step towards something new which takes a tremendous amount of courage. As such, he hopes that this drama will give a much-needed encouragement to those who want to make changes in their lives.