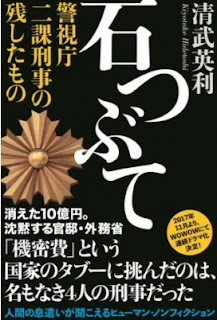 WOWOW will be making the real-life adaptation drama of Kiyotake Hidetoshi's non-fiction book "Ishitsubute" which will consist of 8 episodes and be shown from November this year in the Sundays 10pm timeslot. The book will be released by Kodansha from 25 July while the drama's director and scriptwriter will be Wakamatsu Setsuro and Todayama Masashi.

The drama titled "Ishitsubute ~ Gaimushou kimitsuhi wo abaita sousa nika no otokotachi ~" (Slingshot ~ The men of the second investigation unit who expose the secret funds in the Ministry of Foreign Affairs) is based on a true case which happened in 2001 and involved the defrauding of secret funds from the Ministry of Foreign Affairs. The investigation officers faced an uphill task of venturing into the sacred territory of the country and had to fight the forces within the organisation to uncover the truth in this case caused by the "three evil men" i.e. high-ranking officers in the ministry.

Kiyotake commented that the book is not meant to be about the police officers' conducting an arrest only but rather how they fight against the temptations dangled by the organisation in order to derail the investigation and how these ordinary police officers initially thought that they were dealing with a small case but ended up with a landslide which shook the country. These officers did not have the intention of seeking any reward for their work nor recognition in history so he wanted to show how they went about their duties in the most upright manner.

I'm a sucker for underdog and cop stories. Put them together in a drama and you've got my undivided attention. I have high hopes for you, show. Please be good.