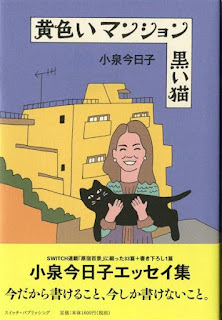 Koizumi Kyoko won the 33rd Kodansha Essay Award with her book titled "Kiiroi Mansion Kuroi Neko" (Yellow Mansion Black Cat) as reported on 20 July. The book is not the first book written by Koizumi but is her first which had won a literary award. The content of the book is like an autobiography which contains 34 essays talking about the days she spent in Harujuku where she lived for a long time since her teens and after making her debut in 1982 and her thoughts about the town and her life as she strolled through the streets there again after all these years. She will be presented with the award during a ceremony held on 14 September which comes with a prize money of one million yen.

Koizumi has always been known as an avid reader and mentioned before that when she was a teen idol, she would use books as an excuse for not talking to people as she didn't like to be disturbed when she was busy. Unexpectedly, this led to her gradually developing an interest in books.

Sources: Sanspo / Yomiuri Hochi / Sponichi
Posted by Chiaki at 12:50 AM