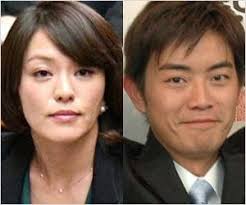 Imai Eriko who is in her first term as a member of the House of Councillors under the Liberal Democratic Party (LDP), was reported to be having an affair with Kobe City councillor Hashimoto Ken according to the 27th July issue of "Shuukan Shincho". In the report concerned, it described how Imai and Hashimoto had been holding hands while they slept on a Shinkansen train travelling from Osaka to Tokyo and that they had spent the night staying at the same hotel in Osaka.

Imai made her debut as a member of SPEED in 1996 and went solo after the group disbanded in 2000. She got married to 175R's vocalist SHOGO in May 2004 and gave birth to their son in October the same year. However, the couple parted ways in September 2007 and Imai later revealed that her son had hearing issues in 2008. On the other hand, Hashimoto is married with two children but is said to be on the verge of divorce.

In response to the media reports, Imai released a statement where she apologised for her actions and how it had created inconveniences and trouble for everyone around her especially when this was a tough time for her political party. However, she strongly denied that she was having an affair with Hashimoto as he had told her that he was undergoing divorce mediation when he asked to date her and how his marriage had broken down a long time ago. Imai admitted that she had grown to like Hashimoto while they worked together and he had given her a lot of advice in politics ever since she stood for election last summer. At the same time, she had broken up with her longtime boyfriend due to differences in their lifestyles ever since she became a politician. Imai had insisted to Hashimoto that they could only begin a relationship after his divorce was finalised so they did not cross the line of propriety and they did not have an affair as reported. Nonetheless, Imai admitted that the photos published did raise suspicion on the nature of their relationship so she was very sorry for causing disappointment to everyone. Imai also revealed that her son usually lives with her mother and she has a separate apartment where she works and stays at most of the time due to her busy schedule. As such, her son would come and stay with her whenever he doesn't have to go to school. From now on, she will be more careful in the way she conducts herself and will strive to work hard for her supporters and her beloved son.