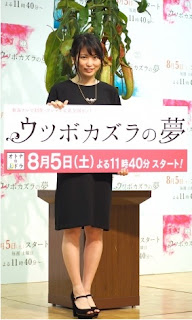 The production press conference of Tokai TV Summer 2017 drama "Utsubokazura no Yume" was held on 28 July which was attended by cast members Shida Mirai, Ootsuka Nene and Kokusho Sayuri. The drama will begin its run from 5 August in the Saturdays 11.40pm timeslot.

The drama is based on the same-titled novel by Nonami Asa, features Shida as the lead character who behaves like the nepenthes that doesn't move on her own and makes use of her prey's desires to achieve her aims. Shida plays 18-year-old Saito Miyufu (Shida) who was raised as an innocent and simple girl in Nagano but is chased out after her mother passed away and her father brings his lover home. Just then, her late mother's cousin Kashimada Naoko (Ootsuka Nene) invites her to come and live with her in Tokyo for the time being. Upon reaching Naoko's place, Mifuyu is shocked by the riches in the Kashimada household and begins to feel indignant about her fate which leads her to begin finding a way to survive thus leading her to become a woman like the nepenthes. Other characters include Naoko's friend Fukumoto Hitomi (Kokusho Sayuri) who tries to keep up a pretense even though she is suffering from financial difficulties, Yoshioka Keisuke (Matsumoto Toshio from EXILE) who is the person-in-charge of a NPO where Naoko helps out at, Naoko's husband Yuutarou (Haba Yuuichi) who expresses an interest in Mifuyu when she comes to stay with them and Yuutarou's mother Hisako (Matsubara Chieko).

Shida who is 24 years old, commented that she was worried about whether she would be able to play a 18-year-old now and doesn't think that Mifuyu is a bad woman since she is just looking for a place where she can survive and she has become wiser in securing this position when compared to before. She also said that the characters in this drama are all flawed in their own ways. Ootsuka echoed the view that the human beings are actually more terrifying than ghosts while Kokusho commented that this drama will drive away the sleepiness near midnight with its story and all women actually have a utsubokazura trait in them which needs to be awakened.

Shida revealed that Tokai TV had given her a 1.6m-high utsubokazura plant as a present but she didn't know what to do with it and wasn't very thrilled by this. In the end, Tokai TV took back the plant so it was lucky that she didn't have to think about how to handle it.