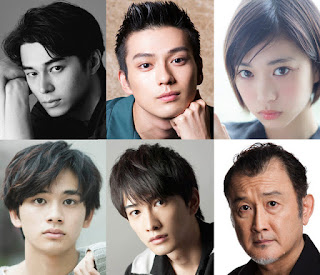 Higashide Masahiro, Arata Mackenyu and Morikawa Aoi will be starring in the new movie "OVER DRIVE" directed by Hasumi Eiichiro which will be shown in cinemas next year. The movie is based on the theme of car rally racing  which features a group of young people who are passionate about this sport. Hasumi who had been preparing this movie for many years, commented that there will be many scenes featuring the high-speed road racing and how the professionals in the industry devote themselves to this sport without giving up easily. As such, he thinks that this film will be capable of exceeding the "Umizaru" series which also depicted how people challenge themselves to the limit.

Higashide plays the lead character Hiyama Atsuhiro who works as the chief mechanic and engineer at Spica Racing Factory. Since young, he has been very interested in machinery and is a highly-regarded technician in this line and trusted by his teammates. His younger brother Naosumi (Arata) is a genius driver belonging to the same team but keeps ignoring his elder brother's advice and is focused only on aggressive driving so as to win. He also creates a lot of problems in his private life thus is regarded as a troublemaker. Morikawa plays Endo Hikaru who is a greenhorn in rally racing but has been assigned to become Naosumi's new agent. The relationship between Atsuhiro and Naosumi gradually become so strained that it is affecting the team as they battle with their rivals during the races.

Higashide revealed that before the filming began, the mechanic team got together for rehearsals which has helped them to build up good rapport. He also hoped that they would be able to convey the passion and excitement in the story to the viewers when the movie is released. As for Arata, he pledged to work out and deliver a great performance to show how a man lives in the beautiful world of rally racing.

Co-stars also include Kitamura Takumi who plays Shinkai Akira, the driver of rival team Sigma Racing, Machida Keita who plays Masuda Junpei, the new mechanic in Spica and Yoshida Kotaro who plays Tsuzuki Issei, the CEO and director of the Spica team.

Email ThisBlogThis!Share to TwitterShare to FacebookShare to Pinterest
Labels: Movie News, Over Drive