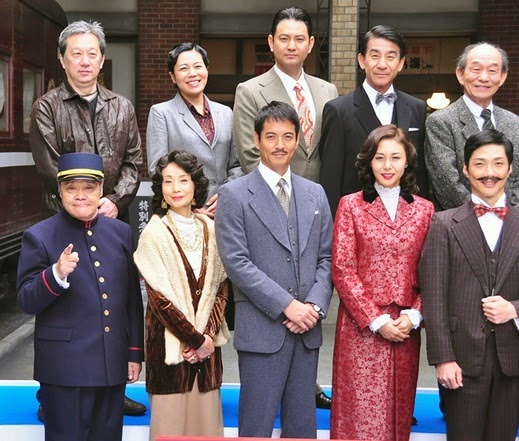 The drama SP which is based on Agatha Christie's "Murder on the Orient Express" and is the first drama adaptation of this novel in Japan, is a special production to mark FujiTV's 55th anniversary and will be shown early next year over two nights. In this drama SP set during the early days of the Showa era, Nomura will play the role of famous detective Suguro Takeru who investigates the murder case taking place on the Tokubetsu Kyuukou Toyo departing from Shimonoseki. The first part of the SP will be largely in line with the original novel while the 2nd part will look at the case from the culprit's point of view thus offering a different perspective for the viewers. Mitani revealed that he is a great fan of the original novel and was very thrilled to be given a free hand to write an original story for part 2 of the SP and work with a star-studded cast. As for Nomura, he commented that he took up the offer for this leading role back in 2011 without knowing what he was in for or what the story was about. He commented that he felt honoured to be able to be the lead actor in this cast.

Filming is said to have been 25 percent completed to date.

Thanks for sharing news of this! I'm excited for Tamaki Hiroshi :)

Interesting what it's to behind on Agatha Christie.

Looking at the way they described the story, only Part 1 should match Agatha Christie's version. They might have a different ending because Mitani has a free hand in deciding how Part 2 goes.