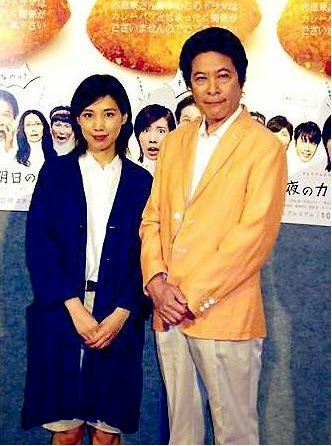 The press conference of new NHK drama "Yube no Curry, Ashita no Pan" was held on 19 Sep which was attended by the lead cast members Naka Riisa and Kaga Takeshi. The drama which will begin its run from 5 October at 10pm on Sundays, features Naka as a young widow who lost her husband due to illness and describes her life with her father-in-law.

This drama also marks Naka's first leading role in a drama since she got married to Nakao Akiyoshi and gave birth to their son in October last year. As such, Naka commented that this drama came at the right time in her life since she had gone through various new experiences i.e. becoming a wife and mother although she felt the pressure in taking on the lead role after taking a break for some time. In addition, Naka revealed that there were many eating scenes but she is poor at using chopsticks so she had to check constantly how she was holding them during the filming.