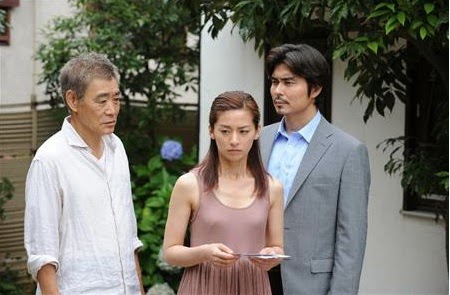 Ono Machiko, Emoto Akira and Ozawa Yukiyoshi will be starring in the new TV Asahi drama SP "Matsumoto Seicho ~ Sakamichi no Ie" which is due to be shown this winter. The drama SP which is based on the same-titled novel published in 1959, features Ono as Rieko, a young and beautiful hairdresser who happens to visit a bedding shop owned by Yoshitaro (Emoto) and the latter becomes so besotted with her that they begin an affair without his wife's knowledge. On the other hand, Rieko hates her late mother (Fueki Yuko) for sleeping around with other men but is actually following in her footsteps by sleeping with men for money. One day, she reunites with her first love Naoki (Ozawa) who has become an assistant professor and shares a dark secret with her. Soon, the romance between them is rekindled. However, Yoshitaro who has lost his fortune and is about to lose Rieko, becomes consumed by jealousy which brings Rieko, Naoki and him to the point of no return.