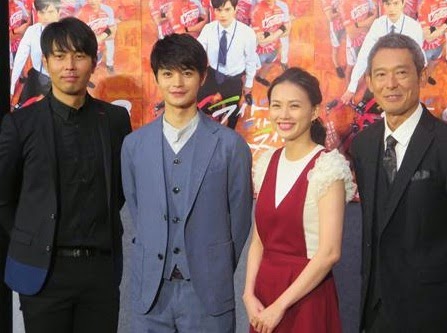 The completion screening event of new NHK drama SP "Ride Ride Ride" was held on 5 September which was attended by the cast members Seto Koji, Hakamada Yoshihiko, Usuda Asami and Tsurumi Shingo. The drama SP which will be shown on 24 September at 10pm, is set in Nasu, Tochigi, where a trust bank employee played by Seto has to help a professional road racing team involved in boosting the local area's tourism industry become financially profitable again. Hakamada plays the leader of the racing team, Usuda plays Seto's girlfriend and an interpreter at Nasu Heisei Forest while Tsurumi plays the coach of the racing team. Tsurumi who is a big fan of road cycling, revealed during the event that he appeared as an extra in the racing scenes and asked the viewers to try if they can spot him.

The theme song of the SP i.e. "Wonderland" is written and sung by Saito Kazuyoshi whose hometown is in also Tochigi Prefecture.