Have a say in who or what is the best in The Dorama World Awards 2016! (UPDATED) 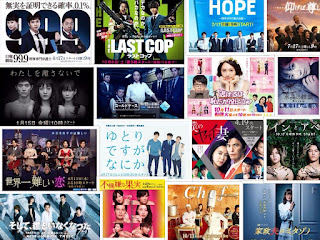 As the year nears its end, there are various rankings and survey results released to crown the best and most popular in the year. Since this year is the 10th anniversary of Dorama World, I wanted to do something different to commemorate the occasion and organise some activities to engage the readers in a fun way. The 10th anniversary game held earlier this year was a new initiative which I hope you had fun participating in.

As such, to mark the end of 2016, here is an event where you can choose the best in the dorama scene for the past year through the inaugural Dorama World Awards 2016. Here are the details on the voting process:

- Please key in your name or put an unique nickname so that I can identify you. Note that this is a mandatory field for the form to be accepted. Each person should vote only once. Responses with the name Anonymous will not be accepted as I wish to prevent mass voting for the same drama or individual which can affect the results.
This is essentially not a popularity voting as we are trying to find out which dramas and actors/actresses are most favoured for having done well in the past year.

- For each of the 7 categories, you may select up to 5 people/dramas but please rank them in order of preference as the higher-ranked choices will be given more points. Of course, if you don't have that many choices for the category concerned, you can just key in the number of choices you have in mind. Answers should be keyed in such a format:
1) A
2) B
3) C
4) D
5) E
Please vote in all 7 categories with at least one answer in each category.

- Voting is to be done through the Google Form hosted below:
https://docs.google.com/forms/d/e/1FAIpQLSdz18EqiEYVywzm-rDnhRwg-Aav6UIhMVt_28jlqoQd_9WJNA/viewform
Please do not post your responses on the Facebook fan page, Twitter page nor comments section of this post owing to the fact that we are having a prediction of results game after the voting has concluded.

- For the last category of Drama Couple, it is restricted to the actors and actresses whose characters were involved in a romantic relationship in the drama concerned. However, whether they actually end up together in the drama does not matter.

- For leading and supporting actors and actresses, we will follow the classification as per how Japan does for these dramas. In most cases, there is only one lead in the drama so everyone else in the cast would be supporting actors and actresses. A classic example would be "Boku no Yabai Tsuma" where Ito Hideaki was the lead actor but Kimura Yoshino who played his wife was classified as a supporting actress. Likewise for "Suki na hito ga iru koto", Kiritani Mirei was the sole lead so everyone else would be considered as part of the supporting cast. As such, please kindly take note of this and vote for the right person in the corresponding category.

- All dramas series aired within 2016, be it on the private networks, NHK (Taiga or morning dramas also OK) or WOWOW, would be eligible to be selected in this voting exercise. However, drama SPs and dramas on portals like Hulu and Netflix should be excluded.

After the voting exercise has concluded, I will post a list of the top 5 in each category for the second phase of this event i.e. the guess-the-winner game! From the shortlisted top 5, you can then choose which drama or who you think would be the winner in each category. 5 readers of the blog who get the most answers correct will stand to win a prize!

More details on the voting process and form will be released in January 2017.

I really hope that everyone can participate in this event and make this a success. Looking forward to receiving your responses and have a say in crowning the best of 2016!

UPDATE: I would really like to seek your cooperation in the following so as to make the voting process work more smoothly:

- For the couple category, the sole criteria is that the characters would have had a romantic relationship in the drama concerned. However, some of the votes received so far tend not to be of this nature so I can't include them e.g. Katsumura Masanobu & Yonekura Ryoko in Doctor X 4. As far as I'm aware, there's no romantic link between their characters but please correct me if I'm wrong. Likewise, if you are voting for Yamazaki Kento & Kiritani Mirei or Miura Shohei & Kiritani Mirei in Suki na hito ga iru koto, both pairings would be valid due to the romantic relationship rule even though the latter did not end up together. In addition, I would like to see the names of the actors/actresses and not the names of the characters they play as this would require me to take the additional step of searching for the name of the drama where they appeared in.

So far, there's quite a wide pool of candidates who have received votes but it looks like those "more recent" dramas are doing better because people probably have a deeper impression of them. As such, those shown during Winter 2016 and Spring 2016 have paled in comparison in terms of their performance to date. Do take your time to consider your choices and use up all the available votes rather than just choose one when filling up the voting form.