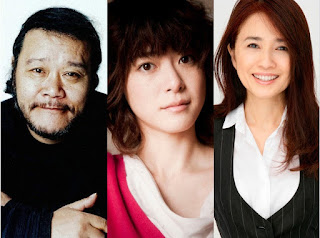 SMAP's Katori Shingo will be starring in the new TBS Winter 2016 drama "Kazoku no Katachi" (The Form of a Family) which will begin its run from January 2016 in the Sundays 9pm timeslot. He plays the role of a 39-year-old man Nagasato Daisuke who  works in a stationery manufacturing company, is so used to living alone and hates being hurt by relationship issues. Despite being a popular guy among his friends, knows all the latest trends and has various hobbies, Daisuke is labeled as a man who cannot get married. However, his peaceful life is disrupted when his father Yozo (Nishida Toshiyuki) suddenly tells him that he had remarried another woman but she walked out on him without a word and dumped her own son who is a junior high student on Yozo. Having no choice, Yozo brings his stepson to live with Daisuke who finds his single lifestyle in a mess because of their never-ending arguments. At the same time, Daisuke finds himself embroiled in another feud with his neighbour Kumagai Hanako (Ueno Juri) who is a 32-year-old woman working in a big trading company, is demanding of others, likes to complain and was divorced in her early 20s. The two of them have similar characters which lead to them becoming arch enemies with each other. Hanako's mother Ritsuko (Fubuki Jun) also comes to live with her as she cannot stand her husband's wish to live a slow life in Karuizawa but irritates her daughter with her busybody personality.

Katori commented that his character is exactly the same as himself and joked that he has many real-life examples near him to help in playing this role i.e. his fellow SMAP members Nakai Masahiro, Kusanagi Tsuyoshi and Inagaki Goro. He said that all of them are men who can't get married but for different reasons so he wants to take elements from each of their situations to integrate into his role. As for his first collaboration with Ueno, he expressed his impression of her as someone who is unpredictable thus he is looking forward to the chemistry between them when they start filming. On the other hand, Ueno expressed her interest in playing someone who is not that keen on marriage and hopes that the interaction between her and Katori as well as the people around them will let the viewers see the importance of family relationships and what it means to get married and form a family.

Exception of Takuya ,The member of SMAP've been A SINGLE BAND.