Ueto Aya to star in remake movie of "Oshin" 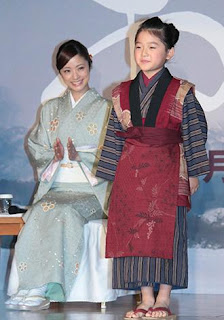 The production press conference of the movie remake of 1980s hit drama "Oshin" was held on 5 February which was attended by key cast members Ueto Aya and Hamada Kokone. Hamada, a 8-year-old primary school student from Miyazaki Prefecture, got the role of young Oshin through an audition of 2,500 people. Ueto Aya who wore a kimono to the press conference, will be playing Oshin's mother.

The drama was a morning TV novel shown on NHK in 1983 written by Hashida Sugako which was set in a poor village in Tohoku during the Meiji era. The drama crossed the 60% mark and was shown in 86 countries and regions during the 80s. Ueto who takes over the role of Oshin's mother from Izumi Pinko, commented that she feels the pressure about taking on the role. Izumi will take on the role of the first wife in the master household for the movie which is due to be shown from October this year.