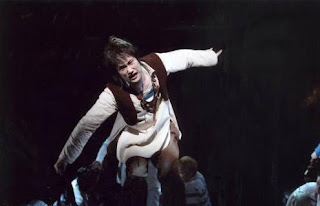 The first-day performance of stage play "Tooi Natsu no Gogh" was held on 3 February at Akasaka ACT Theatre and will run till 24 February. As this is Matsuyama Kenichi's first attempt at stage plays, he commented that although he was nervous, he was glad that the first performance worked out well in the end. He also expressed confidence that this is a play which will be enjoyed by both adults and children.

Matsuyama plays a cicada who leaves his girlfriend (Minami) behind by mistake when he emerges from the ground one year earlier than planned. In order to ensure that he gets to meet her one year later despite the fact that cicadas can't survive past one winter, he goes through a lot of challenges. His friend is played by Tsutsui Michitaka while the queen ant is played by Aran Kei and Yoshizawa Yu plays an earthworm. The play lasted about two and a half hours with an intermission and consisted of lots of action scenes and jumping up and down 7m while strung on wires.