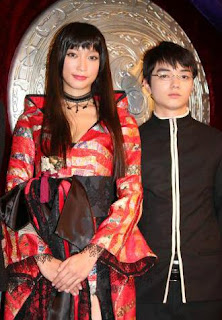 The production press conference of new WOWOW drama "xxxHOLIC" was held on 21 February which was attended by lead cast members An and Sometani Shota. The drama begins its run from 24 February at 11pm on Sundays and is based on the popular CLAMP dark fantasy manga which has sold 12m copies to date. An plays the role of Ichihara Yuko who is the owner of a shop that grants wishes if someone is willing to pay a corresponding price. Sometani plays a high school student Watanuki Kimihiro who is able to see monsters and is the assistant of Yuko. An revealed that she is a fan of the manga and was elated yet worried when she took on the role. In order to make sure she gets Yuko's mannerisms correct, she studied the manga many times and also lost three kg through swimming and muscle training. On the other hand, Sometani who has very short hair, had to wear a wig to play the character.