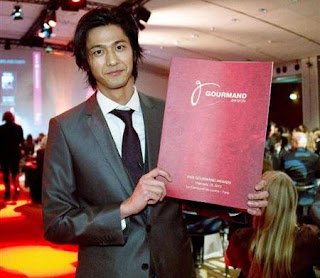 Hayami Mokomichi won the Gourmand World Cookbook Awards' Japanese cooking category with his cookbook "MOCO's Kitchen" and attended the prize-giving ceremony in Paris on 23 February. He has been hosting the cooking corner in NTV's morning programme "ZIP!" since 2011 on the weekdays and released 6 volumes of "MOCO's Kitchen" to date which has sold over 350,000 copies. The books contain the 500-odd recipes he demonstrated on the programme during this period. Hayami commented that although it was tough trying to come up with new ideas on what to cook every week, he was also encouraged by the anticipation and support viewers showed towards his programme. On the other hand, food researcher Matsumoto Sakafumi also won the Grand Prix in the single theme category with his book on how a Matsuzaka cow ends up on the dining table as sukiyaki.

The Gourmand World Cookbook Awards are established in 1995 and gives out awards in various categories such as recipes, wine, food photography. This year, there were 13,000 entries from 170 countries which took part.

I am in Japan for a short time & would love to get my hands on all of his books. Do you know if they come in English? I am currently using the Yoko's Yummy Food app but prefer hard copies.
Arigato gozaimashita!

From what I understand, there are no English versions for his recipe books. In case you need the list of his books, here they are:

I think he also released two MOCO's Kitchen DVDs which you can try searching for when you are in Japan.

Hope that this helps!