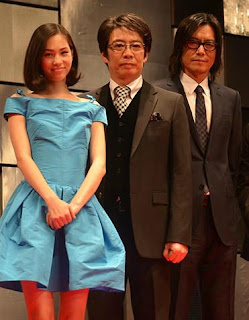 The completion press conference of movie "Platina Data" was held on 25 February which was attended by cast members Ninomiya Kazunari, Toyokawa Etsushi, Suzuki Honami, Namase Katsuhisa, An and Mizuhara Kiko. The movie is based on the same-titled mystery novel by Higashino Keigo which features Ninomiya as a talented scientist who goes on the run when he is suspected to be a serial killer. Toyokawa plays the police detective who is hot on Ninomiya's heels. The movie is due to be shown in cinemas from 16 March.

Source: Sponichi
Posted by Chiaki at 1:51 AM