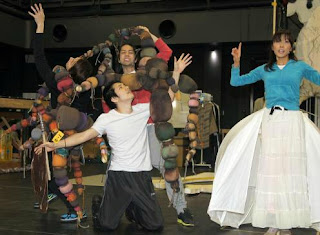 The open rehearsal of Sports Nippon News Agency's 60th anniversary commemorative stage play "Tooi Natsu no Gogh" was held on 24 January where lead cast members such as Matsuyama Kenichi, Minami and Yoshizawa Yu made appearances. Matsuyama who is acting in a stage play for the first time, plays a cicada in this play and expressed how he found it difficult to portray a cicada and mimic the sounds it makes. When congratulated by the media for the birth of his second child, Matsuyama thanked those who were present and expressed his joy about this.

Source: Sponichi
Posted by Chiaki at 12:40 AM