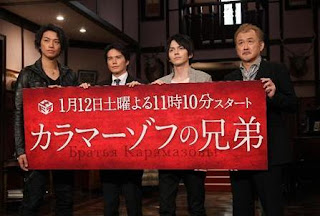 The production press conference of FujiTV Winter 2013 drama "Karamazov no Kyoudai" was held on 4 January which was attended by its key cast members Ichihara Hayato, Saito Takumi, Hayashi Kento and Yoshida Koutarou. The drama is scheduled to begin its run from 12 January at 11.10pm on Saturdays and is based on a long novel by Fyodor Dostoyevsky published in 1880. Saito, Ichihara and Hayashi play three brothers who are suspected of killing their father (Yoshida) and as the investigations progress, shocking truths about them are revealed along with social problems of present-day Japan being highlighted e.g. social gaps and political chaos.