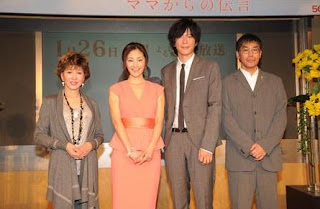 The production press conference for TV Asahi drama SP "Yurichika e Mama kara no dengon" was held on 24 January which was attended by cast members such as Tokiwa Takako, Tanabe Seiichi and Toake Yukiyo. The drama will be shown on 26 January at 9pm and features Tokiwa as a mother who's down with a terminal illness and tries to write a book for her young daughter. Tokiwa jokingly remarked that this is the second time in 2013 that she "died" because her other role in TBS drama "Tonbi" also passed away due to an accident. She recounted during the filming of this drama that she was slapped so hard by Toake who plays her mother that she thought that this was the worst slap she had suffered in her acting career.