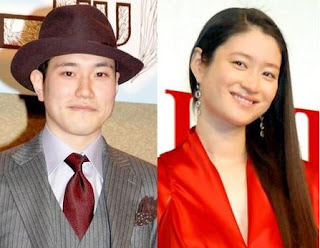 Koyuki announced the birth of her second child with Matsuyama Kenichi on 10 January through a fax statement sent by her agency. In the statement, she revealed that their daughter was born on the same day and expressed joy at welcoming the arrival of their new family member. Matsuyama was able to witness the birth of their daughter as it happened to be his off-day from rehearsals for his play "Tooi Natsu no Gogh". The couple's first son was born on 5 January last year which makes both their children January babies.

Adding more information based on today's article:
1) She had given birth in Seoul, South Korea.
2) Apparently, she came to know about the post-birth maternity services in South Korea after she appeared on the NTV programme "Another Sky" which aired last June. As such, she decided to head there for the childbirth in order to make use of those services.
3) Services reportedly include a ward which is like a hotel room, 24/7 support from the nursing staff and massages to rectify the pelvic bones which had expanded during pregnancy and childbirth.
4) The full package reportedly costs JPY 100,000 for two weeks.