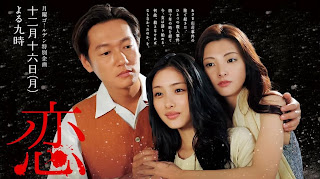 Despite having a very simple title, the story of this SP is not exactly as straightforward as it suggests. Right from the start, when you have more than a man and a woman in the equation, things are likely to get complicated. At the centre of this story are Yano Fumiko (Ishihara Satomi), a 22-year-old university student, Katase Shintaro (Iura Arata), an university's assistant professor and his wife Hinako (Tanaka Rena). Back in 1972 on 28 February when the whole of Japan's attention was on the United Red Army's Asama Sanso case in Karuizawa, another murder-cum-assault case took place in the vicinity but was little talked about. Fumiko was sentenced to jail for fatally shooting Okubo Katsuya (Saito Takumi), an employee from an electrical shop, and injuring Shintaro and causing him to be paralysed from the waist down. Hinako was also at the crime scene but nobody revealed what exactly happened on that day which led to this outcome.

More than 40 years later, a report writer Torigai Mitsuhiko (Watabe Atsuro) comes to look for the now-elderly Fumiko (Harada Mieko) in a bid to find out what really happened in the 1972 case. Although Fumiko is initially resistant about opening up, she decides to talk after knowing that she is about to die due to terminal cancer... 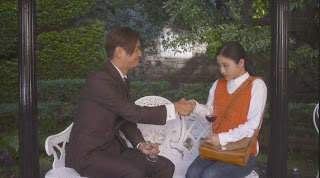 Fumiko had come to know the Katase couple when she was engaged to work part-time and assist Shintaro in the translation of an English novel. However, she soon realised that the relationship between Shintaro and Hinako seemed twisted especially when she finds out that Hinako was sleeping around with others but Shintaro didn't seem bothered by his wife's behaviour. Fumiko also found herself being drawn to Shintaro and eventually had a one-night stand with him. She was expecting Hinako to get angry with her for sleeping with Shintaro but was shocked to know that she seemed nonchalant too. This deeply shook Fumiko as she found it very difficult to understand what was going on in the Katases' minds.

Soon after, Hinako began an intense relationship with Katsuya who had come to their Karuizawa bungalow to fix a broken light. Shintaro realised that this relationship was different from that of those physical ones which Hinako had in the past and was greatly disturbed by Katsuya's presence. Fumiko felt bewildered by Shintaro's sudden change in behaviour and only came to know the big secret Shintaro and Hinako had been hiding which explained why they behaved the way they did in the past. Upon knowing this, Fumiko wanted to help Shintaro and Hinako get back together but Hinako was reluctant to let go of Katsuya. At the end of the confrontation, Fumiko shot Katsuya to death and accidentally wounded Shintaro who had tried to protect Hinako who was shielding her lover. 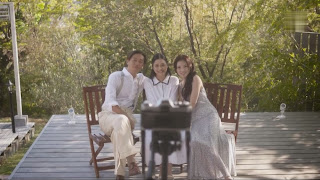 Frankly speaking, until you get to the final revelation, the story might not have made much sense especially since it was unfathomable why Shintaro and Hinako were together despite her cheating ways. However, I thought that the reason was weaved nicely into the story so it didn't feel like it was shoved down your throat and forced the reader/viewer to accept it point blank. Although the likelihood of this happening may seem quite low in real life, I think that was probably the only way to explain why Shintaro and Hinako had such a relationship and could stay married.

On the other hand, Fumiko's obsession with the couple seemed a bit more difficult to understand, at least to me. I can understand that she was attracted to Shintaro and felt sorry that he was about to lose Hinako to Katsuya which led her to commit the shooting. At the same time, I think she also felt a lot of admiration for and adored Hinako which led me to wonder at times if she had loved Hinako in the same way as she did for Shintaro. However, to protect their secret and spend her prime years in jail was too big a price to pay. Then again, she probably gathered that telling the truth would not have helped her to receive a lighter sentence since she did kill Katsuya and hurt Shintaro after all. Maybe to most onlookers, it would be impossible to rationalise why Fumiko was so besotted with the couple and wanted them to stay together but I guess the writer of this story probably just wanted to show Fumiko's side of the story and leave it to viewers to decide if she was silly for sacrificing so much in the name of love. On the surface, the Katases did not really seem to be doing anything to "repay" Fumiko for her actions but I think the growing of that tree and Shintaro's message to Fumiko in the credits of the translated book suggested that they were indeed grateful to her, just that it couldn't be expressed openly in ways such as meeting Fumiko face-to-face. I think if they had to meet up, the anguish, pain and weight of the past might make it a very sorrowful reunion for the trio. I doubt that that the Katases would have even thought that their own decisions and actions would indirectly impact someone's life so drastically so the only way they could make amends to Fumiko was probably to stay together as what she would have wished for. 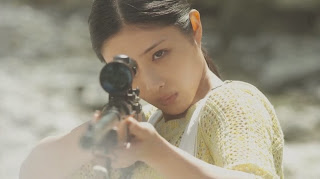 As for the cast's performance, Ishihara Satomi would definitely be more eye-catching, considering that she is the lead and her character goes through a subtle transformation from one who doesn't know love to one who gives her all for love. Fumiko was initially fumbling in front of the Katases, unsure of how to behave but gradually became more at ease around them. In this regard, I think Ishihara handled the change in Fumiko quite nicely and convincing.

On the other hand, I think Tanaka Rena attracted my attention more because she was simply so relaxed in her portrayal of Hinako that I thought she was Hinako herself. Having watched Tanaka since her debut days, I think she has finally come to the stage where she's totally at ease with herself and her acting is becoming more natural in the sense that she looks convincing in whatever character she plays. This can only come with more experience so I'm looking forward to seeing her in even more eye-catching roles in future. As for Iura Arata, he has this air of mystique that draws people which I think he displays it well during his interaction with Ishihara Satomi. Then again, his role was pretty bland throughout the first part of the story until he showed his vulnerability when Hinako became involved with Katsuya so in this sense, he is at a losing end compared to his female co-stars whose characters tend to be more intriguing.

And my ratings for this drama SP...

Story: 7 out of 10 (Whether you agree with the decisions and actions taken by the characters is one thing but I thought the story was crafted quite nicely, albeit pacing could be improved)
Acting: 8 out of 10 (More for Ishihara Satomi and Tanaka Rena)
Theme song: 5 out of 10 (There isn't a so-called theme song for this SP but the BGM was fine, just not that impressive)
Visual effects / Scenery: 7.5 out of 10 (The scenes at Karuizawa were especially nice to look at e.g. the lush greenery)
Teamwork / Chemistry: 7 out of 10 (I thought that the three leads worked well together)