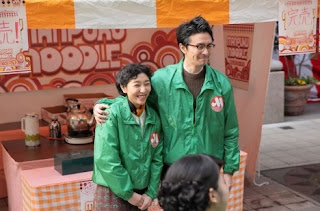 Although I have not been posting anything about drama ratings in recent years, I think that it's only right for me to share these key highlights in Manpuku's ratings for the past 6 months especially as it is the very first morning drama which I managed to complete in real time. Be prepared for more Manpuku-related posts in the days to come especially my review of this drama!

- The first episode registered a rating of 23.8% and 20.4% in the Kanto and Kansai regions respectively. This was the highest debut episode rating so far in the asadora history.

- The highest single episode rating for the Kanto region was the first episode while for the Kansai region, it was the last episode.

- Ever since "Asa ga kita" in 2015, this is the 7th consecutive asadora which has registered an average rating of above 20%. Manpuku's average rating was higher than the 6 dramas preceding it, with the sole exceptions being "Toto Nee-chan" (22.8%) and "Asa ga kita" (23.5%).

- The ratings trend: Manpuku started off very well in its first episode and maintained an average rating of above 20% up till the 13th week before the New Year break. The only episodes when it went below 20% was on 4th and 5th January i.e. straight after the New Year break. It returned to the 20s region from the 15th week all the way to the end of its run.