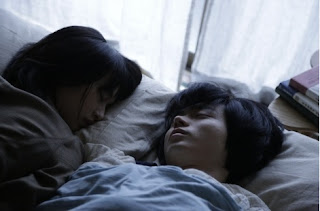 Kadowaki Mugi who is starring in her first leading role in a movie through the upcoming "Nijuu Seikatsu" due to be shown in cinemas from 25 June, will be playing lovers with Suda Masaki in the film. The movie which is based on Naoki Award winner Koike Mariko, features Kadowaki as the heroine Tamaki who gets obsessed with trailing a stranger played by Hasegawa Hiroki and gradually starts behaving strangely. Lily Frankie also appears in this film as a mysterious professor who suggests that Tamaki start following a stranger.