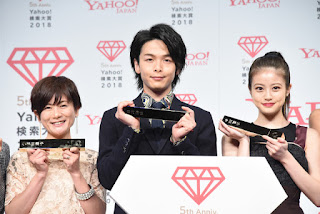 Yahoo! Japan Search Awards is an annual event which lists the people and things that experienced a surge in online searches via Yahoo! Japan as compared to the previous year. This is a barometer of the amount of attention which the person or thing has enjoyed in the past year. The measurement period is from 1 January to 1 November of the current year.

As the list of winners is very long, I will only feature winners in the people and culture categories which are more related to J-ent in general:

* Interestingly, "Segodon" was the most-searched keyword in Kagoshima Prefecture probably because it was the lead character Saigo Takamori's hometown. Meanwhile in Okinawa Prefecture, the locals were the most interested in Amuro Namie, their homegrown diva who retired this year.