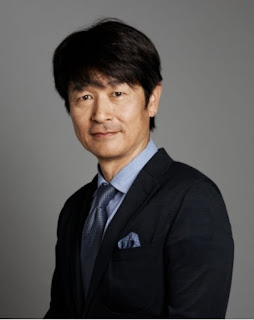 Oricon published an interview with Fukuda Yasushi, the scriptwriter of NHK morning drama "Manpuku" back in October where he revealed some behind-the-scenes stories about the drama. I won't be translating the whole interview but will just mention some of the key points here.

- After he wrote the script for the Taiga drama "Ryomaden", he actually thought that there might be a day when he could be asked to write a script for a morning drama. As such, when the offer came for him to write "Manpuku", his first thought was that "this has finally come!".

- However, Fukuda had written stories mostly about adults so he was unsure how he could do the same for a lead character who is a young woman. The fact that each episode was just 15 minutes also made him worried if he could tackle this. When he remembered that he did a similar project back in 2004 for NHK i.e. "Tokio Chichi e no dengon" (starring Sakurai Sho) which had 20 episodes of 15 minutes each, he became confident that he could manage this and changed his mindset to make this into something which is not just about a young woman's life.

- Initially, there was a discussion with the producer on whether they should do an entirely original story on a fictitious character or use a real-life model instead. Among the choices they came up with, they finally decided on Ando Masako who was the wife of Nissin Foods' founder Ando Momofuku. Unfortunately, although there were tons of information about Momofuku who had many superb achievements such as creating the instant ramen in packets and cups, there was nothing about Masako even after searching on the Internet, using a database used by the media or going to museums. This was because Masako was someone who seemed to stay in the background rather than share the limelight with her famous husband. As such, "Manpuku" can be considered as an original story since it is actually 80% fiction.

- He spoke to Masako's descendants and heard many touching stories about the couple and how she was a very kind and gentle person. However, to create a "selling point" in the story rather than just make it into one where the wife simply follows the lead of her husband, he created Fukuko as someone who is optimistic, flexible enough to adapt to changing situations such as the initial conflicts between her husband and mother and become a peacemaker between Manpei and Suzu rather than be a modest and quiet supporter of Manpei.

- He created Manpei with the image of Steve Jobs. Back then in Manpei's era, nobody actually expressed a need or demand for instant ramen so Manpei's invention / business venture was very risky because it could have flopped with no demand and no consumer market to sell to.

- He imagined that Suzu would probably find it hard to understand her son-in-law's "crazy ideas" and deliberately designed her to be someone who would keep making discouraging remarks about her son-in-law. This indirectly created a form of comedy between Suzu and Manpei which would make the story more interesting.

- What's real and identical between Masako and Fukuko were that the two of them were both the third daughter in the family and their eldest sisters were so beautiful and popular with men. Their second sisters were both married to artists whose houses attracted lots of birds for some reason. And to top it off, there was a dentist who did come riding a horse to their house and kept making marriage proposals to the eldest sister. Fukuda joked that Maki Zennosuke (Hamano Kenta), the dentist who liked the eldest sister Saki (Uchida Yuki) was probably his most favourite character! He expected that NHK would have a way somehow in bringing a horse into the studio for the filming and was pleasantly surprised that they managed to do it.