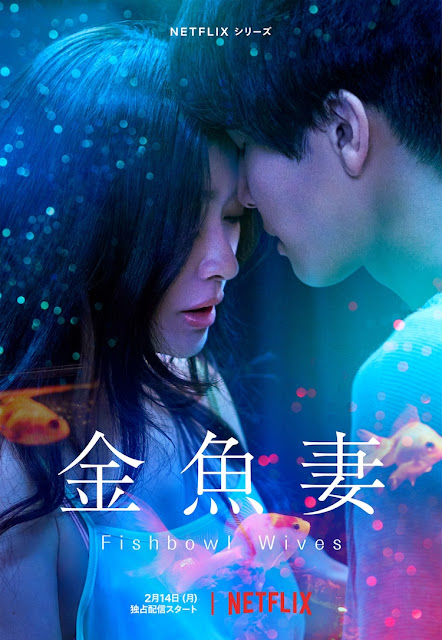 Title: Kingyozuma 金魚妻
Season: Winter 2022
Broadcast by: Netflix
Rating: 6 / 10
Recommended for: those who like stories about extramarital affairs peppered with lots of explicit intimate scenes
Liked:
- The visuals - be it the artistic direction of the scenes, the set, the scenery in outdoor scenes or the good-looking cast members - are a sight to behold
Disliked:
- This being based on a R-rated manga, there are bound to be lots of "adult scenes" but to have these scenes being "prolonged" on screen can be a real pain to sit through. I found myself wondering at times just when the scenes would end especially since the time could have been devoted to making the story better. Granted that the physical relationship element is integral to the wives featured in this drama, the level of "detail" was still excessive. I feel especially bad for the actresses here though - did they really have to go to that extent and show that much nudity for these scenes?
- Much as the story tries to "justify" why these wives had to look for comfort in men other than their husbands, not every story was convincing enough. If there was more time for each story, it would have strengthened the argument for these wives rather than leave an ambiguous aftertaste.
- The lead couple's ending is rather illogical - it wasn't as if the wife was going back to her ex-husband so why was there a need for her to part with her younger lover? For the sake of regaining her independence with relying on her lover? Maybe the intention is to show that they could be together again when their circumstances improve after some time but it could have been presented in a more convincing manner.
Posted by Chiaki at 12:23 AM