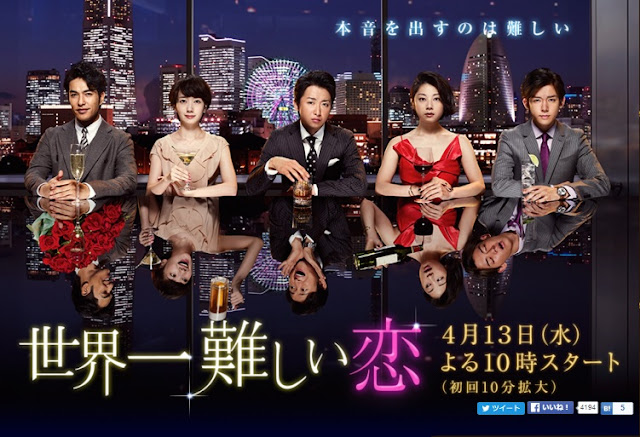 Title: Sekai ichi muzukashii koi 世界一難しい恋
Season: Spring 2016
Broadcast by: NTV
Rating: 7.5 / 10
Recommended for: those who like light office romance comedies where the lead couple is fumbling their way through to love
Liked:
- The quirky and hilarious journey of how Samejima Reiji (Ohno Satoshi) tries to win the heart of his subordinate while being held back by his clumsiness and awkwardness.
- Engaging and interesting supporting characters who stand out in their own ways especially Muraoki Maiko (Koike Eiko) - the motherly figure who teaches Reiji how to woo the woman he loves - and Wada Hideo (Kitamura Kazuki) - the rival-turned-mentor for Reiji who can be quite obnoxious at times but knows what he is talking about
- Yokohama. I like the city a lot and to see that the hotel featured as Reiji's hotel was where I stayed at before and to see so many familiar sights of Yokohama in the drama bring back a lot of fond memories.
- And of course, seeing Ohno in a love comedy (his first & only) which coincidentally happened to be his last drama series before going on hiatus.
Disliked:
- Haru is a good actress. However, when it comes to romance stories like this, I always have this feeling that she's emotionally detached from or should I say, not involved in the character. Maybe it's her cool image getting into the way at times but when the lead couple didn't look like they were in love, I found it difficult for me to root for them and get more invested emotionally in this drama.
- The pacing of the drama was generally fine but when it got to the emotional conflict towards the end, I found it too draggy. And the conclusion was...hmm...hard to say that it was bad but it certainly wasn't that impressive either.
Posted by Chiaki at 12:28 AM