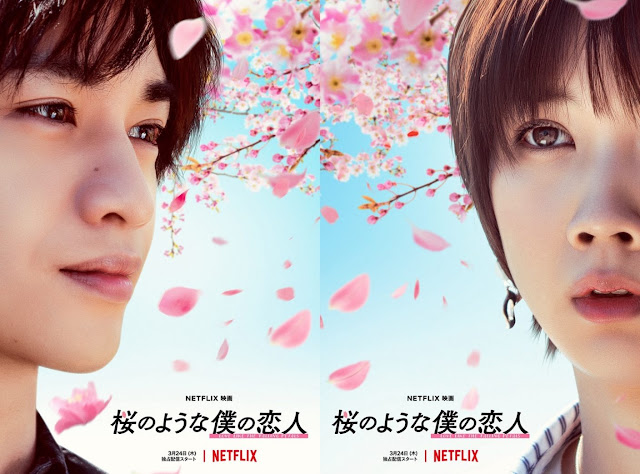 Title: Sakura no you na boku no koibito 桜のような僕の恋人
Broadcast by: Netflix
Rating: 7.5 / 10
Recommended for:
- Those who like bittersweet love stories and don't mind the cliched plot of a lover having a terminal illness and leaves/breaks up for the sake of not burdening his/her other half
- Fans of Nakajima Kento & Matsumoto Honoka
Liked:
- The beautiful scenery featured as the seasons changed in the story
- The better-than-expected good acting - it was especially refreshing to see Nakajima Kento play a shy and awkward but earnest guy as compared to his usual "Sexy Thank you" act-cool style and Matsumoto Honoka shine in a cute role brimming with youth and positivity before the twist in the middle. However, I must say that Nagayama Kento and Sakurai Yuki were the ones who really stood out so much despite being the second leads.
- Not showing the heroine's physical changes to the viewers until the end - it was a smart move to accentuate the impact and shock felt by the male lead since he wasn't able to see the heroine after quite some time later.
Disliked:
- The storyline is cliched and predictable - you need to be really patient to sit through 2 hours of something when you can already foresee the developments and ending
- Waste of talent - there were quite a few notable names in the supporting cast lineup but their fleeting appearances hardly left an impact since there was nothing much for them to do anyway.
Posted by Chiaki at 12:35 AM