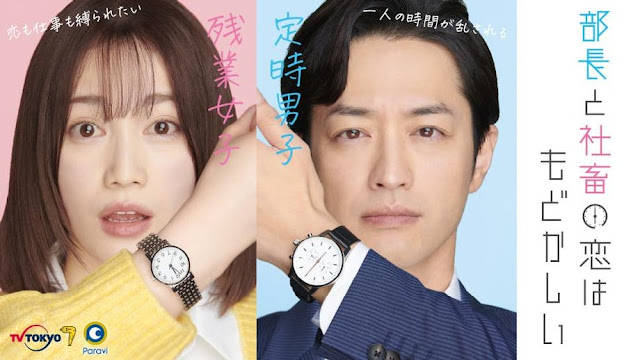 Title: Buchou to shachiku no koi wa modokashii 部長と社畜の恋はもどかしい
Season: Winter 2022
Broadcast by: TV Tokyo
Rating: 6 / 10
Recommended for: those who like office romance stories with a unconventional beginning
Liked:
- The first two episodes - the lead couple got off to a sizzling start right from the first episode and the second episode's intimate scene was as good, if not better than the one in the first episode.
- Each episode is only 30 minutes so it's easy to get through the story.
Disliked:
- True to its title, the modokashii element (annoying, irritated, impatient) element dominated the rest of the story which was a huge contrast to its speedy start. If not for the fact that each episode was only 30 minutes, I would not have been able to sit through this.
- The chemistry between the leads was also somewhat lacking - this was especially obvious when the story started to show more of the emotional development in their relationship.
Posted by Chiaki at 1:02 AM