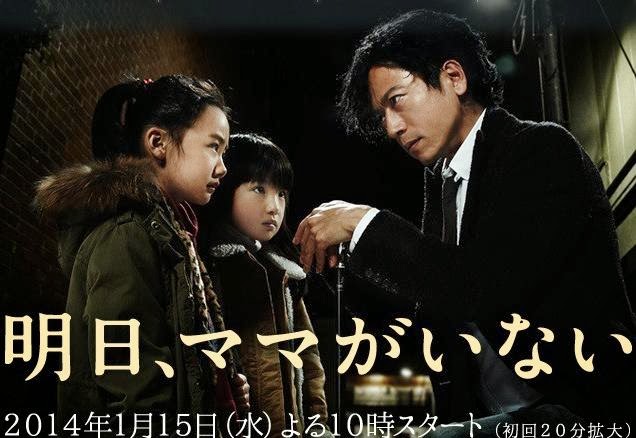 Jiei Hospital which is located in Kumamoto City and hosts the nation's only baby post box which takes in children abandoned by their parents on an anonymous basis, raised its objections regarding NTV's Winter 2014 drama "Ashita Mama ga inai" for its incorrect and prejudiced portrayal of the children and staff in children's welfare facilities and has asked for the termination of the drama as of 16 January. The hospital is also planning to file a motion against the drama with the Broadcasting Ethics & Program Improvement Organization (BPO).

The drama which began its run on 15 January, talks about the plight of the children living in a welfare home as they are unable to live with their mothers for a variety of reasons. The hospital took offense with the fact that the key character played by Ashida Mana had the nickname "Post" which was in reference to the fact that she was dumped at the baby post box by her mother. It said that this was an added insult and blow to the children in welfare homes and that the emotional torture by the staff towards the children and invasion of human rights in the drama was definitely not the case in reality.

In response, NTV commented that the purpose of the drama is mainly to show the strength and innocence in the children as they cope with the tough circumstances and how they see love from their viewpoints. As such, there will be developments in the drama showing how people love these children. In view of this, NTV said that the broadcast of the drama will proceed as planned and hoped that the hospital will view the entire drama in order to understand the message it is trying to convey rather than jump to conclusions based on the first episode only.

Comments: Actually, this isn't the first time NTV had complaints about its dramas. As far as I can remember, "Joou no Kyoshitsu" also had the same problem initially because Amami Yuki's character was a total devil towards the kids. "14-sai no Haha" also suffered some backlash because of its controversial theme. Whenever NTV does something which is socially-controversial, I think it's inevitable that people will react in vastly different ways. However, asking for the drama to be cancelled may be too much of a knee-jerk reaction since NTV just showed one episode. I understand where the hospital is coming from and its concerns but ultimately, this is a dramatic expression of a social issue. Of course, the majority of the people working in the industry are kind and don't treat children like how they do in the drama but I don't think people will discriminate against the staff just because of this drama. Like what NTV says, perhaps watching till the end will give a more well-rounded perspective of why they want to produce this drama and what kind of message it is trying to convey at the end.
Posted by Chiaki at 5:50 PM

Interesting you mention "Joou no Kyoshitsu"... I consider that one of the best dramas ever made, even though it was quite harsh in the beginning. (And what about the first episode of "Mother", which was extremely harsh? -- also NTV, if I remember correctly).

"Joou no Kyoushitsu" was very controversial in the beginning because of Akutsu Maya's (Amami Yuki) treatment of the children e.g. ranking them based on academic performance and punishing those lagging behind to do more chores and how different it was from the usual heartwarming classroom dramas. Of course, things did take a change of course towards the end which justified why Akutsu behaved the way she did. I'm sure "Ashita, Mama ga inai" will probably end the story on a positive note somehow but not before subjecting the key characters through the harsh reality. Sadly, the criticism aimed at the drama doesn't seem to want to give it a chance to prove itself like what "Joou" did.

Actually, I found myself agreeing with what a lot of what Akutsu said to the kids then because those were things that you would only realise when you grow up and as kids, nobody tells you that for fear of "destroying your dreams and fantasies about the society and world the child is going to live in". The delivery of the messages were indeed harsh and very uncomfortable at times which I thought was even more aggressive that what I observed in "Ashita, Mama ga inai" so honestly speaking, I really don't see why this drama must get bashed till this extent. Leads me to wonder if the Japanese audience was more tolerant of such dramas back in 2005 or even the 90s when Nojima Shinji's series of socially controversial dramas were widely talked about and praised for the bravery to talk about such themes compared to now when the delivery of such messages must be toned down to pacify everyone? Or is it because people have more ways of making themselves heard or have become more vocal about expressing their views thus the controversy seems to have grown bigger in a short period of time?

I do understand Jiei Hospital's and the welfare homes' concern based on their statements so far but I still wonder, there have been "worse" dramas in the past with even more sensational themes which were not forced to make changes or stop. And it looks like NTV is softening its stand...which I don't think bodes well for the drama scene in the long run.