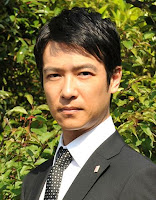 Sakai Masato and Ueto Aya will be teaming up as a married couple in the TBS summer 2013 drama "Hanzawa Naoki" which begins its run from 7 July at 9pm on Sundays. The drama which is based on the popular novel "Oretachi Bubble Nyuukougumi" by Naoki award winner Ikeido Jun, features Sakai in the role of a salaryman named Hanzawa Naoki who works in a bank and is not afraid to stand up for his rights especially when his boss tries to push the blame to him when things go wrong. He goes by the motto of "an eye for an eye" when it comes to dealing with people and doesn't bat an eyelid when getting back at people who do him wrong. However, under his aggressive facade, Hanzawa is a man who treats his subordinates and family with gentleness. Ueto Aya will play his wife who dares to stand up against her husband. Co-stars include Kagawa Teruyuki, a director at the bank who understands why Hanzawa is the way he is as well as Kitaoji Kinya, Oikawa Mitsuhiro, Hey! Say! Jump! member Nakajima Yuto and Dan Mitsu.

Source: Sponichi
Posted by Chiaki at 12:54 AM