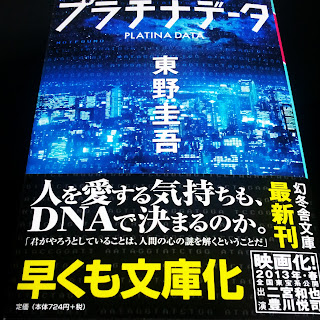 Although I posted this in my other blog, I thought this should also be posted here now that Platina Data is scheduled to be shown in Singapore later this month. No, I didn't pay $25 for the premiere today (11 May) because I simply did not fancy paying this amount of money for the popcorn, drinks and a poster which I have nowhere to hang up. No doubt I'm absolutely dying to watch the movie and see how it differs from the novel, I'll have to hang on till the end of the month and find out for myself. If you've seen the movie today, please....do not tell me what you saw. ^__^

Even though I bought this book in September last year, I only managed to complete it in late March because I read a few pages and stopped for a long time because I was tied up with other things. It doesn't mean that this novel is bad in any way though so I would like to make this clear. I have a bad habit of wanting to buy new books even though I still have a huge number of unread stuff to go through so I'm trying hard to resist the urge to get new books and aiming to finish my waiting list first. Since the movie version was just released in March, I thought that I should finish this first in case the movie does come to Singapore anytime soon. Last time I heard, it should be coming to our cinemas in May! (UPDATE: It's scheduled to be shown from 23 May!)

Anyway, if you haven't read this novel and wish to avoid knowing how the story develops, I would suggest that you skip this review. I certainly do not want to spoil the fun for you especially if you are in the midst of reading it or haven't even started.

Before I begin sharing my thoughts on this, let me give a summary of the key characters involved and their relationships with one another. Note that there are some minor characters I've left out since they did not appear for too long: 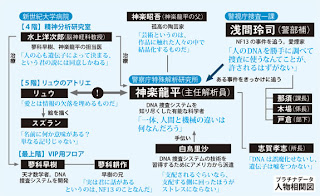 Despite the fact that there are so many characters in this story, the movie version chooses to make some changes to the lineup and only showcases the characters I've put in bold as the main cast (based on what I see from the movie's official site). I am guessing some of the characters above may also appear in the movie. Besides this, Tateshina Kousaku's character is also missing from the lineup while Minagami is changed to become a female (Suzuki Honami) in the movie.

The novel can be largely broken up into three main arcs i.e. the events leading up to the development of the DNA Investigation System, the Tateshina siblings' double murders and the manhunt for Kagura. To begin with, the novel talks about how the police is developing this DNA Investigation System which uses DNA data to do matching in order to find criminals easily and accurately. Besides that, it can also help to project how the person may look like and even reveal specific physical characteristics about the criminal and his/her family members. However, Asama being the type of old-school police detective you see in most police dramas who believe in using his feet to find the criminals i.e. going around looking for clues or questioning people, he doesn't believe in the DNA Investigation System which is very strongly "promoted" by Kagura. Despite Asama's resistance and lack of faith in the system, it turns out to be a great thing after all as the police solve cases quickly and get their hands on the criminals easily. Kagura who strongly believes in the worth of his system and data then takes part in efforts in boosting awareness of the system and getting all Japanese citizens to provide their DNA to be included in the database despite concerns over privacy etc.

The second arc is set some time after the DNA system takes off and it is then revealed that the system is actually developed by the Tateshina siblings who stay in a VIP room at Shinseiki University Hospital. Kagura is also revealed to have a dual-personality by the name of Ryu so he has to seek treatment at the same hospital to allow Ryu to "appear" at designated times to do his thing. However, during one of the visits to the hospital, Kagura finds the Tateshina siblings dead in their room and starts to doubt whether Ryu could be behind it. In addition, he is horrified to see that his own DNA was found on Saki which will place him under suspicion as the culprit. 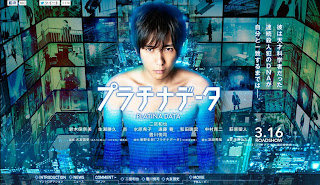 The final arc shows Kagura being aided by Shiratori as he goes on the run to find the truth. Asama who goes after Kagura, slowly realises that there is more to what it seems as they both arrive at the same conclusion...

I must say that the beauty of this novel lies in Higashino Keigo's ability to craft his characters in such a way that gets you fully emotionally invested in what happens to them and to surprise you with unexpected developments just when you least expect and that helps to keep the reader engaged instead of losing interest. Frankly speaking, I thought the first arc was a tad slow but given that it needed to show all the relationships between the characters, explain how the DNA Investigation System came about and why it was touted to be a lifesaver as well as show a contrast in Kagura and Asama's attitudes towards the system. One thinks that it is the solution to everything and can do no wrong while the other thinks that it is definitely not without its flaws. Of course, Kagura gets proven wrong at the end because the same system he believes in actually led to him being accused of something he did not do. No doubt he had suffered while being on the run, I think the experience helped to make him see things from different perspectives instead of being stubborn in everything. It was also good that Asama doubted the accuracy of the system or else he would have been tricked into believing that Kagura was responsible for the murders. Sometimes, a police detective's instinct works better than hard and cold data.

Things start to heat up in the second arc after the murders took place especially as Kagura also doubts himself or rather his other self about whether he is the murderer. Although Kagura and Ryu have been co-existing without much trouble, Kagura does not seem to think too favourably about his alter-ego while Ryu can't be bothered with Kagura either. The amount of faith that Kagura has in his DNA Investigation System can be seen from the fact that he chose to doubt Ryu first instead of the system. With Shiratori's assistance, he begins his journey of being on the run before the police can catch up. During this period, Kagura finds out more things about Ryu and that he even has a girlfriend Suzuran who seems to appear and disappear at will.

The third arc offers a lot of revelations and unexpected twists as Kagura is fighting with an invisible enemy i.e. the real culprit while Asama is investigating the case through his own ways. Although they appear to be going in different directions, they manage to arrive at the same conclusion somehow or so it seems. I won't give away the ending because it is really gripping and very interesting. As for how the main characters end up, I would say that it's a happy ending after all although I think there's a tinge of regret and it's not an ideal fairy tale conclusion. It's something more in tune with the circumstances described in the novel and really more believable as something which might happen in the real world.

On the whole, I think this is a great novel from Higashino which is truly a classic piece of work. I'm not sure if this has been translated into other languages yet but if you can read Japanese, do pick this up and have a go at it. I don't know if the movie follows the novel very closely but I'm guessing it might not, going by some telltale clues in the cast.
Posted by Chiaki at 12:16 AM

I've watched the movie first and then read your review about the book and it makes me really want to read it, but sadly I can't read japanese, and as far as I know, there is no English version of this book.
There is one thing that makes me kind of curious about the ending though. How is Kagura/ryu life after that? In the movie, kagura is kind of 'send' ryu the letter about it will be the first time and also the last time they talked. So is that mean kagura decided to suppress ryu personality and then come as the main personality? Is the ending on the movie is totally the same as the book? I hope you can answer me, thanks!