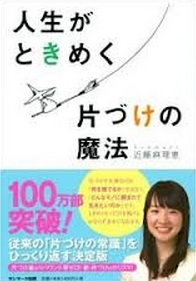 Nakama Yukie will be starring in the drama SP adaptation of bestseller book "Jinsei ga tokimeku Katazuke no Mahou" (The magic of tidying up which makes your life prosper) which is due to be shown this autumn via NTV. The book written by Kondo Marie and shows the how-tos of tidying up in various aspects of life, has sold 1.35m copies to date and was the No.2 bestseller book in the first half of 2012. The second installment which was released in October last year has also sold 250,000 copies so far.

Nakama will play the role of Norita Makiko who is a lecturer on how to tidy up and has the signature line of "anata no jinsei ni kata wo tsukemashou" (let's clean up your life). Although Norita always has a nice smile on her face, she's actually someone who doesn't mince her words and would always provide ways to help her clients tidy up their lives. Co-stars include Natsuna who plays a OL facing problems with work and her love life and this is the second time they are working together.

Source: Yomiuri Hochi
Posted by Chiaki at 12:49 AM