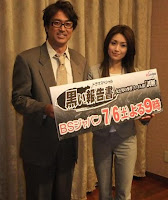 Sakai Noriko and Ishiguro Ken attended the production press conference of BS Japan's drama SP "Kuroi Houkokusho Onna to Otoko no Jiken File III Gokai" on 7 May in Tokyo. The drama features Ishiguro as a magazine editor while Sakai plays a former editor who aims to become a writer and the two of them work together to investigate a murder case arising from relationship problems. This is the first time Sakai is appearing in a drama since she was found guilty of violating the stimulants control act in 2009 and returned to showbiz in December last year. Her last drama appearance was in FujiTV's "Maru Maru Chibi Maruko-chan" in February 2008.